17th May, 1871. Belleville on the hill. The socialist, universal AND beautiful republic is singing its swan song. Behind the nick-nack barricade, Paris is burning and the massacre begins.

Standing on a canteen table outside, a citizen-soldier, professional wine merchant, amateur poet, hosts a poetical jousting match. They call him derisively “Captain Fleet” – but to save time, his name is Pilote. There are a few poets and a crowd of builders, roofers, stonemasons, soup sellers and others. All kinds of workers. All armed. Among them, a washerwoman, who goes by the name of Jeanne Marie. She’s got strong hands. She was chosen in this makeshift competition to elect the winning poet.

The captain calls up the first poet and everyone applauds. He starts to recite – his poem talks about the time of wine and roses and blackbirds. Very pretty.

“You ought to sing a song,” says the washerwoman. In the middle of this working-class gathering, the wine-merchant poet espies a tall, sulking, lanky lad. “Wanna read a poem?” asks Pilote. Without responding, the whippersnapper gets up on a table and, all the staring at the hands of Jeanne Marie, recites the 27 stanzas of Le Bateau Ivre. At the end, the capitan, who had been dozing, decrees “It’s too long!” And Jeanne Marie adds, “That reminds me of my bloke who was a sailor and drunk all the time”. Because we’re not from Versailles, we’re not going to nail you to the wall and stab your eyes with a parasol, but you’ve got to come back some other time. Applaud the poet!” the wine-merchant exclaimed.

To console the loser, he also said to him “The best poet never wins!”

It is not known who won this poetic jousting match. It is forgotten. There were other concerns behind the barricade. The Versailles soldiers were coming. Some remained. Others preferred to stay alive. Just like the wine-merchant poet, who preferred his poets living instead of being dead in a library.

The young poet went back home to his mother at Charleville Mézières, wondering if it wasn’t better to stop his career as a poet there and go away to do business in Harar. Getting over his disappointment, sitting on the side of the road, he thought of the hands of Jeanne Marie and began to scribble some verses. The captain of the fleet went into exile in Switzerland. He retrained as a watchmaker, all the while concocting more precise rules for his game of poetry. This is why, 150 years later, every Tuesday (COVID notwithstanding), at Belleville, at 21h30 sharp, poets have precisely 3 minutes and 10 seconds to recite their poems. And this is why every year, poets from all over the world, in the flesh and on Zoom, come to the hill to compete in the poetical jousting match and this is why Belleville is proclaimed the universal republic of those who love saying and listening to poems.

And as my grandmother always used to say: “Go and wash your hands!”
P.L.H. 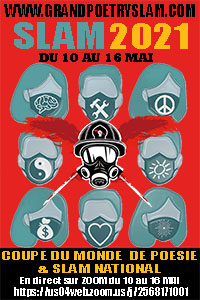